This creative pair released their first Bodily Press collaboration in May, 2020: The Scaffold in the Rain, a limited edition color chapbook featuring acrylic paintings by Sean Ali, & poems by Eliot Cardinaux. 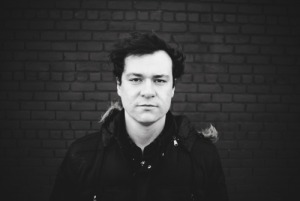 Sean Ali is an artist, poet, and musician living in Queens, NY. As a bassist, composer, and improviser, his recorded work has been featured on Neither/Nor Records, FMR, Eh? Records, Creative Sources Recordings, Wee Space Tapes, Edible Onion, and Prom Night Records. He has toured extensively in North America and Europe and performs regularly in New York City with a diverse array of projects including Natura Morta (w/ Frantz Loriot & Carlo Costa), While We Still Have Bodies (w/ Michael Foster, Ben Gerstein, & Flin van Hemmen), Impulsive Instrument (w/ Butoh dancer azumi O E), a string trio with Joanna Mattrey and Leila Bordreuil, and solo. His chapbook Awake Afar Off was released by The Bodily Press in 2017.

Eliot Cardinaux is a poet and pianist living in Northampton, Massachusetts. He is the founder and editor of The Bodily Press, through which he has released the work of others, as well as several of his own chapbooks and CDs. He has led or co-led musical projects such as American Thicket, Our Hearts as Thieves, Gestures, Odysseus Alone, Magpie: Six Feet on Solid Ground, Cleanness, Sweet Beyond Witness, and take me by the hand of darkness. His most recent collection of poetry, Around the Faded Sun, was released by The Bodily Press in 2020. Eliot performs and records regularly along the Northeast U.S. and in Europe, with musicians such as Asger Thomsen, Flin van Hemmen, Mat Maneri, Thomas Morgan, Will McEvoy, Randy Peterson, Max Goldman, Mia Dyberg, Eivind Opsvik, Kresten Osgood, and Taus Bregnhøj-Olesen.