The Bodily Press is proud to present take me by the hand of darkness a trio record by poet/pianist Eliot Cardinaux, bassist Will McEvoy, and drummer Max Goldman.

take me by the hand of darkness

Weaving lyrics, spoken and sung through an improvisational landscape of sharp turns, hidden worlds, and shadowy ambiance, at once chidingly humorous, and nakedly vulnerable, Eliot Cardinaux, Will McEvoy, and Max Goldman’s first recorded effort as a trio, take me by the hand of darkness, is everything but conventional. 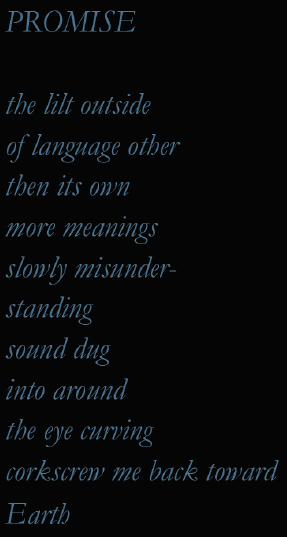 From the record’s opening statement, rife with darkly empathetic mystery and harmonic brittlety, to the hauntingly open lyric and chant-like psalm at its end, take me by the hand of darkness is more of an invitation into the unknown than what might seem from its title, a pleading farewell.

The meat of the album, on the contrary, provides a glimpse into a long future for this ensemble, rich with on-the-edge risk and experimentation. The musicians are alert and alive throughout, plumbing, with respect and warmth, the depths of the improvising tradition.

Will McEvoy’s harmolodic approach is revealed not only in his keen and quick ear for melodic counterpoint, or his anchored yet light touch on the bass, but by his compositions as well, two of which are featured on this outing.

The first is a loose, fiery, harmonized melodic line, titled “Muzz ’n’ P,” based on which the trio’s improvisation stretches out. The second, the longest track and a centerpiece for the record, is an uplifting slow burn in homage to the late bassist Charlie Haden, aptly titled “Song for Charlie.”

Eliot Cardinaux’s compositions, by contrast and complement, help bridge the gap between his clustered and tightly-knit pianistic approach to harmony and the ensemble’s branching off-the-map improvisations.

From the surrealistic, Ellingtonian tone poem “At the Conservatory,” and the hard-swinging, satirical “Physical Variety,” to the raucous confessional absurdity of “Anarachnid,” and wistful vulnerability of “Absent” — the latter three of which feature, for the first time on record, the pianist and poet’s singing voice — Cardinaux’s compositions are diverse in mood and scope, blending seamlessly with McEvoy’s own compositions, and the ensemble’s free improvisations as well, some of which also include spoken poems by Cardinaux.

Max Goldman’s sensitive and empathetic drumming heightens the album’s sense of both texture and color, as well as time and groove, with Goldman employing by turns light cymbal and brushwork, heavy-hitting thunder, auxiliary percussion, and when needed, an immense pocket.

The album is available on CD, as well as streaming on Bandcamp with an option to download.